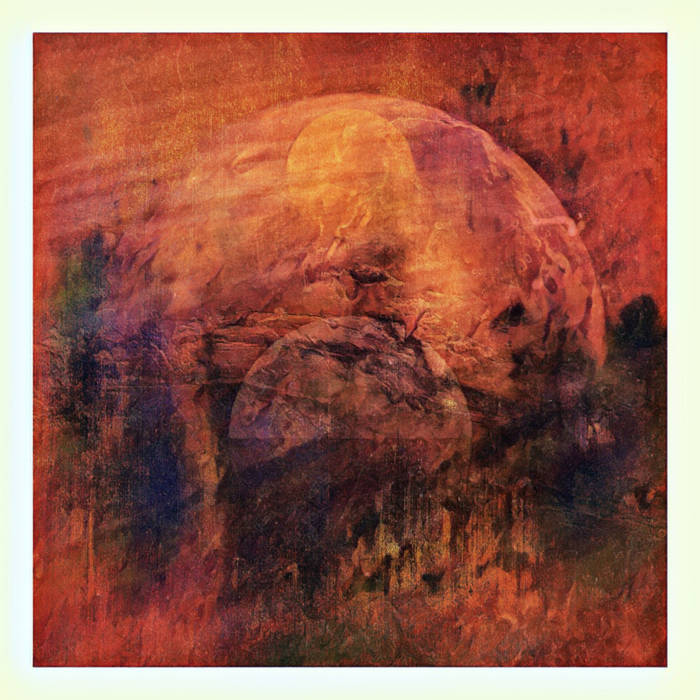 Simon Majestic. This is not the soundtrack to The Martian Chronicles, but it could have been. Favorite track: II - Curiosity.

Theo This is a beautiful collection of ambient greatness. When I'll picture a trip to Mars in my mind, it will sound like this from now on. One of my favorite ambient albums of 2018 so far. Favorite track: VIII - Dust to Dust (A Long Way From Home).

In.Visible.Generator A beautiful pearl of an album pop's up on my screen. A strongly conceptual masterpiece with a cinematic edge. Chris Weeks catching the theme perfectly and shape it full of sense and ideas. So many to discover here. Great! Favorite track: V - Pathfinder.

Mars is and has been very bright in the night sky of late. I’m somewhat of a ‘night-owl’ and enjoy periodically stepping outside and staring up at the stars. I’m no astronomer, but I do like to stargaze, to look up and ponder, often whilst listening to music I’m working on.

Mars has been so dominant a feature of late that it’s been hard to ignore. This is also true of Mars’ current media attention. It seems like there has never been a time before (certainly not in my lifetime) where Mars has featured so heavily in day to day news stories and in the media in general. It has been the inspiration of many television shows and discussions.

Mars is the closest it’s been to Earth in the last fifteen years, but more exciting is the idea that it’s becoming more and more plausible that someday soon, perhaps within the next twenty years that human beings will set foot upon the surface of Mars! I’ve watched numerous programs and read lots of literature about Mars and the idea of human colonisation of ‘The Red Planet’. All this and more inspired me to create this album.

‘Journey to Mars’ is a simplified imagining of the steps already taken and the future processes involved in getting humans to Mars. The idea behind the sound-design of the record is threefold:

One: Piano features on every track, but utilised and effected in different ways. I wanted to use Piano as the primary instrument across this record. To me it felt like the most common ‘Earth Instrument’. Instantly recognisable, heavily favoured by composers and listeners alike. On this record it has been utilised to represent ‘Earth and humans’; familiarity.

Two: The idea of space-travel, technology and other worlds. This is represented by the more alien soundscapes and digital elements. The synthesised sounds of satellites, machines, computers, glitching and repeating. The modern and futuristic age.

Three: the representation of ‘Dust’, the lo-fi and static-infused layers representing the barren landscape and hostility of Mars. Windswept landscapes, seemingly ‘never-ending’ dust-storms and the sheer isolation.

A synopsis of the Album & Tracks:

‘I - The Lost Observer’: Inspired by the failed ‘Mars Observer’ mission of 1992/93. The first Mars Mission I can actively recall hearing/reading about as I was growing up. Created on manipulated piano, the track echoes the idea of a satellite calling back to Earth with a repeating motif, and the eventual loss of that signal. The melody reflects the syllables in the title, which is in essence an introductory piece; the start of a journey into further exploration.

‘II - Curiosity’: Skipping ahead 20 years I found the story of the Curiosity Rover too hard to ignore. Still active to this day since its initial launch in 2011, it has sent back incredible data and images of Mars. The track plays out in three distinct sections. The intro is designed to suggest space exploration, stepping into the unknown. Curiosity’s journey to Mars. The mid section was written to suggest the act of curiosity itself. The Rover exploring and discovering. The final section mirrors the first, to perhaps be indicative of the inevitable winding down and end of the Curiosity’s mission. It will remain upon Mars after a job well done, a testament to human ingenuity, but it will no longer communicate with us.

‘III - Analog: Dreams of a Red Planet’:
NASA runs ‘simulations’ of what it might be like to live in hostile environments on other worlds. They call these ‘Analogs’. There are a number of active Analogs taking place right now, dealing with a wide range of experimentation on not only the human psyche, but the incredibly hostile conditions we would face if human beings were to survive on Mars. The track begins with a sound of breathing and bleeping to suggest ‘monitored sleep’. This progresses into a simple question and answer motif which is intended to reflect a dream-like state. The track is essentially two pieces. The first section drifts away and is replaced by a building string section. I like to think of the second piece as the realising of a dream. A person who has endured and passed the tests of ‘the Analog’ gets to realise their dream and be part of the first human mission to Mars.

‘IV - Hypersleep (Journey to Mars)’:
Again playing on the idea of sleep and dream-like states, Hypersleep focuses on a repeating swell of sound. It imagines what dreams may find you in a state of suspended animation. Its minimalist, subtle swelling soundscape and building dynamic reflects the nature and concept of Hypersleep. Possibly three to six months of dreaming in a cryogenic chamber, as the spacecraft finds its way to Mars. The subtle piano melody at the end of the piece is used to echo the main motif and perhaps also suggest that the initial stage of the journey is over.

‘V - Pathfinder’: The track starts with a crescendo of sound created to suggest a craft bursting through the atmosphere and landing upon Mars. The Mars Pathfinder mission carried a series of scientific instruments to analyse the Martian atmosphere, climate, geology and the composition of its rocks and soil. I liked the name Pathfinder so much that I wanted to use it here to suggest the astronauts finding their way onto the surface of Mars. Forging a path to set up Basecamp (a Habitat), from which to live and begin their exploration of Mars; mirroring the Pathfinder mission. The piano phrase which develops after the ‘Lander’ intro was written to suggest hope and accomplishment. A bright and positive tone, but contrasted by the sound of surrounding ‘dust storms’ and alien environment. This initial positivity and tone is ‘distorted’ in the second half of the piece. The bright melody replaced with extended notes and chords, distorted clashes of sound and building soundscapes, ending with the sound of fading radio communications. Suggesting that what started as positivity upon actually making it to the surface of Mars has now turned into the reality of having to endure the hostile environment and face the plethora of dangers and pitfalls that lurk upon this alien planet.

‘VI - Hydroponics’: If humans are going to be able to live on Mars then we’re going to need to be able grow food. One such way of doing this, which is being heavily researched and put into practice here on Earth is utilising the practice and science of ‘Hydroponics’; a method of growing plants without soil, using mineral nutrient solutions in a water solvent. This piece is a minimalistic representation of a Hydroponics-based ‘Martian Garden’. Twinkling piano and strings are juxtaposed with ‘water-like’ field-recordings. The track comprises of two distinct sections which flow into one another. The first perhaps suggests the initial setup and growth of the Martian Garden, the second the success and sustainability of it. The contrasting beauty of being on a barren, dusty hostile alien planet and yet tending to a water-based garden of verdant vegetation; perhaps a much needed reminder of our home planet.

‘VII - Satellites of Mars’: Mars has two Moons (or natural satellites), Phobos & Deimos, named after the Greek mythological twin characters Phobos (panic/fear) and Deimos (terror/dread) who accompanied their father Ares, god of war, into battle. Ares was known as Mars to the Romans. The ominous soundscapes created for this piece are intended to reflect the nature of the names of the Moons and the sense of isolation, awe, wonder and possible dread from being able to physically see these Moons, much like we see our own here on Earth, from the surrounding desolate landscape of Mars.

‘VIII - Dust to Dust (A Long Way From Home): One possible and not so implausible predicament of such a mission could well be the loss of a crew-mate, the failing of the mission, or the stark realisation that it has become a ‘one way trip’. Dust to Dust seemed like a fitting title to reflect a number of these possible scenarios. Not only playing on the words spoken at a burial service, but the idea of Mars being a ‘dust-bowl’ of a planet. Here the dust is suggested by the sounds of thick vinyl crackle and static. The track comes in two main sections. The first a somewhat dramatic and climactic piece, notating and musing upon the feat of getting to and colonising Mars. Here the sounds are intended to reflect an older era, perhaps when the idea of a Journey to Mars was still very much inconceivable. The second a more somber and poignant reflection considering those who may have been lost along the way upon this epic journey.